NEW GADGET!! - Ice Cubes that will tell you when you are drunk! 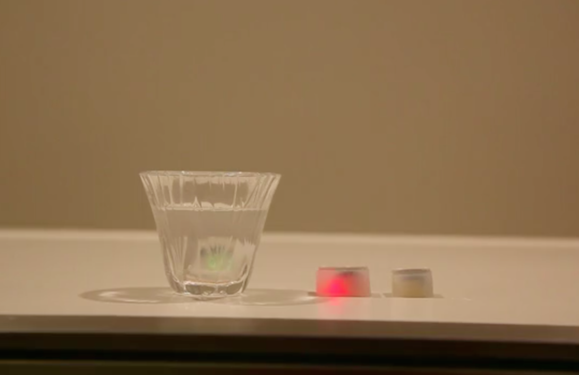 Gizmag reports that Dhairya Dand, the MIT student who invented these light-up cubes, got the idea after experiencing a bad night of his own. During a party at MIT one night, he remembers having three drinks around midnight. Seven hours later, Dand woke up in a hospital without any memory of how he got there or what happened to him. While others would have simply vowed to never let that happen to them again, this young student did something about it by creating smart ice cubes to indicate when he needs to slow down.

Each cube comes equipped with an LED light, an accelerometer, an IR transceiver, and a battery. As you tilt back your cup for a drink, these little devices incased in a watertight and non-toxic jelly keep track of your sips and how long you go between each sip. The lights move from green to red as you drink throughout the night. If you don’t stop after the red light turns on, the cube will send a signal to your mobile device to text a friend to come pick you up. Nothing that small has ever been so responsible.

As an added features, the lights dance to the ambient music in the background. Imagine moving around a room with your own techno beat in a cup.

Right now, the prototypes only turn to red after you have three drinks within a 30-minute period. If this idea ever hits the market, the cubes would need to be smart enough to program in such factors as the weight of the person drinking or their particular tolerance. Until then, you can check out a video to see the cubes in action.
Posted by TURNkey IT at 7:00 AM

Email ThisBlogThis!Share to TwitterShare to FacebookShare to Pinterest
Labels: Cool gadgets, Getting Drunk