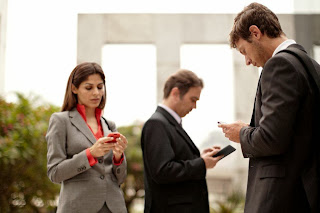 It may sound like an acronym on an invite to a bad wedding but it's not... BYOD stands for Bring Your Own Device and it's really not all that exciting.  BYOD is a buzzword, a trend and one cannot ignore the implications behind it.

It just may be that your employer may someday ask you to bring your own device to work.  For people who work at TURNkey IT, each person gets a mobile phone allowance.  In essence, each person is being encouraged to bring his/her own device and use it for work purposes.  People use their tablets, cell phones and notebook computers for work all of the time.

Users are changing the way they use the internet.  No longer is it just to send a quick email or respond to a text. People are tending to stream music, movies and use bandwidth like never before.  Smartphones, tablets and phablets (phones nearly as large as tablets) are most entertaining when using large chunks of bandwidth.

A single T1 line and a Linksys WRT54G router simply don't cut the mustard any more...  It will be more commonplace to see the demand for 100M fiber connections in the near future and likely increasing to gigabit connections by 2016.

Bandwidth aggregators or link / load balancers help people take multiple ISP connections and put them together.  Now you can have redundancy and total aggregate bandwidth.

Whatever may come of it, technology is very cool and life requires you now to BYOD.  Look around you the next time you're in public, you'll see device after device texting, taking selfies, and generally staying tethered to something.  Google glass thinks we should be even more connected.

We'll see how it all shakes out.

David Kolssak
Posted by TURNkey IT at 10:43 AM No comments:

The human side of IT

People are people and largely creatures of habit.  Each person has his or her own beliefs, values and routines.  When any of those centers gets disrupted, people get off kilter.  When you get a new phone or pc, it is disruptive and people often long for the way it "used to be".

There is a human side to IT that is more compassionate than the SNL character "Nick Burns - your company's computer guy".  For those who aren't familiar, you can find an example HERE.  IT guys can be condescending, rude and snippy.  However, one often feels provoked...

Often times technology works but the people using the technology are the ones with the difficulty.  I would suggest that many of the issues TURNkey IT faces daily are caused by a human condition.  The acronym PEBCAK came about when describing a situation where the Problem Existed Between the Chair And Keyboard.  That is, quite simply, user error.

People don't like to be called out on being silly, stupid, ignorant or misinformed so it is the delicate line an IT professional must walk as he tries to correct the behavior and ultimately the issue at hand.  Sometimes it can be done with a knowing wink and is greeted with a sigh.  Other times the technician may do a poor job of communicating the message without being condescending.

Just as a doctor knows more about medicine, a baseball umpire more about rules and an astronomer about stars - IT professionals know generally how things work in their ecosphere.  IT professionals are constantly adapting to new technologies and are used to the ever changing world we live in.  In a lot of ways, we are shape shifters in the non-literal sense.  A good IT professional will shift from mac, to pc to unix and Linux and through physical layers and theoretical limits several times a day.  It is also quite possible that one becomes less socially potent when lost in the midst of acronyms, technologies and high pressure situations on a daily basis.  The good ones are personable AND refined - a rare breed.

It is not unusual for personality and deep technical skill to be inversely proportional.

At TURNkey IT, we try very hard to foster the human factors that make us so useful in this world.  Be patient to the best of your abilities.  Play nice with others.  Learn something new every day.  Work hard.  Play harder.  Love. Live. Celebrate.

David Kolssak
Posted by TURNkey IT at 1:23 PM No comments: